We’re all gonna die! It’s a sad truth. But just because death is the final destination, it doesn’t mean we need to hurry on our way. If, like most of us, you’d rather delay the inevitable, there are some proactive steps you can take to improve your chances of hitting the century mark and beyond.

Some things have a major impact on life expectancy but are outside of a person’s control, like sex, race, nationality, and genetics. And there are others that aren’t necessarily immutable, but are difficult to change, like socioeconomic status. We won’t focus on either category here. This article deals only with things you can start doing today to help maximize the number of years you’ll spend among the living.

This one’s simple. If you want to live a long time, don’t start smoking. If you do smoke, quit as soon as possible. Yes, some people have smoked their whole lives and lived to be 100 or more. Some people have also fallen from airplanes and lived.

Smoking reduces your life expectancy by ten years. Cancer, heart disease, high blood pressure, stroke, osteoporosis, emphysema… if you can think of a health condition, there’s a good chance smoking either causes or contributes to it.

That’s not to say all is lost if you’re a smoker. If you quit by age 30, you’ll gain almost ten years of life expectancy compared to an active smoker, nearly returning to normal. Quitting by age 40 restores about nine years, and even waiting until 60 to quit will give you back three years of life expectancy. Long story short, no matter how long you’ve smoked, quitting is still worth it.

“You are what you eat” isn’t just a folksy figure of speech. It’s a literal truth. We lose tens of millions of cells per minute, and both the material and the energy required to repair damaged cells and create new ones are extracted from the food you consume. You are quite literally made of the things you eat.

Of course it’s easy to say “eat well,” but difficult to do in practice. It can even be hard to decipher what that means, since it seems like the science is constantly changing. (Seinfeld voice: What’s the deal with eggs?) The best advice? Keep it simple. Get plenty of fruits, vegetables, healthy proteins, and whole grains. Avoid a diet heavy in processed foods and don’t make a habit of fast food. The Healthy Eating Plate from the Harvard School of Public Health is a good place to start.

This falls under “eat well,” but according to at least one study, fiber is important enough to warrant its own headline. In the study, people who ate the recommended daily allowance of fiber were 22% less likely to have died over a nine year period than people who don’t. The benefits were apparent even when researchers controlled for things like exercise level, tobacco use, and body mass index, or BMI. (That stands for body mass index, a standard measure of healthy weight ranges adjusted for a person’s height.)

Not all fiber is created equal, though. In an article on Live Science, American Dietetic Association spokesperson Katherine Tallmadge cautions against simply adding processed foods with added fiber. She theorizes the benefits come from vitamins and minerals in fiber-rich foods like whole grains, fruits, and vegetables, rather than the fiber alone, so don’t just eat a cereal bar and call it a day.

Get enough sleep… but not too much

We know why food is essential for survival, but after decades of research, science has yet to discover the reason humans actually need sleep. What is certain is that we do need it, or our bodies quickly begin to break down. In laboratory studies of rats, complete sleep deprivation proves fatal in a matter of weeks, and humans don’t fare much better.

Even if you get some sleep—just not quite enough—the negative effects catch up quickly. In an article published in The Guardian, researcher Matthew Walker links sleep deprivation with a Who’s Who of diseases you’d rather avoid, including diabetes, Alzheimer’s, and multiple kinds of cancer. And how does he define sleep deprivation? Anything less than seven hours a night.

There could be another condition causing both the extra sleep and the increase in death rates, so the findings don’t necessarily mean too much sleep will kill you. Still, if your goal is to live as long as possible, it seems like aiming for between seven and nine hours per night is ideal. (If getting to sleep is difficult for you, check out our post on sleep hygiene for some helpful tips.)

The Department of Health and Human Services recommends adults age 18 to 64 get a minimum of 150 minutes of moderate intensity aerobic exercise per week, or 75 minutes at vigorous intensity. And the more you do, the better the results. For seniors 65 and above, they recommend following the adult guidelines as long as your abilities and conditions allow, then modifying as necessary.

For reference, “moderate” activity means you could talk while doing it, but you couldn’t sing. To qualify as “vigorous,” you should only be able to say a few words without breathing.

Unless you take steps to prevent it, you’ll lose about 3-5% of your muscle mass each decade beginning in your 30s, and as you age, the muscle loss accelerates. Cardio is great for your heart and overall health, but it may not be enough to stem the tide. Losing enough muscle means losing mobility, which can further hasten physical and mental decline.

Strength is proven to correlate with longevity, and particularly grip strength, since it’s a good proxy for overall strength and mobility. In one study, seniors who fell below expected strength levels were over 50% more likely to die early, even adjusting for factors like smoking and health conditions.

In some cases, a doctor can prescribe hormones to slow muscle loss, but basic strength training is the primary line of defense. Don’t overdo it—there’s no need to become a bodybuilder. Just a simple resistance routine with weights or resistance bands will do the trick. And as with anything physically taxing, talk to your doctor, physical therapist, and/or trainers first. They’ll know best what an appropriate starting point is for your age, health, and medical conditions.

Humans are social creatures. We need connections so much that loneliness is actually hazardous to your health. In multiple studies, having close friendships and family bonds is one of the leading indicators of longevity. In a report published in the journal PLOS Medicine, people with strong social connections had a 50% increased chance of survival over those with weak bonds. According to the authors, that’s on par with the difference between smokers and non-smokers, and an even stronger effect than inactivity or obesity.

The older you get, the harder it can be to make new friends. If you don’t have strong connections, volunteering for a cause you’re passionate about is a great way to meet like-minded people and stay socially engaged. Other options include joining a club for a favorite hobby, fitness or art classes, or working part time.

Easy on the alcohol

Some studies indicate moderate drinking will help you live longer than non-drinkers. Others say drinking any amount of alcohol damages your life expectancy. We honestly can’t say for sure either way. There could be some health benefits of light to moderate drinking, but it’s possible the reasons for the reduced life expectancy of non-drinkers are the same reasons they abstain from drinking, like medical conditions or previous substance abuse.

Still, it doesn’t seem that having a glass of wine with dinner occasionally has many ill effects, and according to at least some studies, may have heart health benefits. If you can limit your alcohol consumption to low or moderate levels, then salud! But the risks outweigh the benefits for many, so if your goal is longevity, don’t start drinking just to improve your health.

Have a furry friend

Adopting a dog is great for lowering stress levels and increasing overall happiness, but Swedish researchers found there could be serious health benefits too. In the study of 3.4 million adults, the team found dog ownership is correlated with a 23% drop in deaths from cardiovascular disease and a 20% lower risk for all-cause mortality. People with hunting breeds like retrievers and scent hounds fared especially well.

It could be another case of correlation without causation, but dog owners do tend to walk far more than they otherwise would. Between the increased exercise and emotional benefits of companionship, it’s easy to see why having a dog might be good for your longevity. (That said, dogs have physical and emotional needs too, so don’t adopt one for the health benefits if you can’t care for him or her properly.)

Good news for those who like spicy food. According to a study from the University of Vermont, eating hot chili peppers is associated with a 13% reduction in mortality. The study, which followed 16,000 people for more than 20 years, found a significant drop in deaths among chili eaters – especially in deaths due to heart attack and stroke.

The going theory is that capsaicin, the chemical in peppers that makes them spicy, may contain antimicrobial properties and aid cellular processes that prevent obesity and modulate blood flow through the heart. But even if none of that is true, spicy food is delicious, so you might as well.

Take care of your teeth

It turns out that there’s a close correlation between dental health and life expectancy. According to at least one study, people who have a full set of teeth at age 74 are much more likely to live to 100 than those who don’t. That doesn’t mean losing your teeth is a death sentence, but oral health is related to (and predictive of) longevity.

To keep your teeth in optimal health, Mayo Clinic advises regular dental checkups, avoiding tobacco use, brushing twice a day with fluoride toothpaste, and flossing once a day. In addition, you should replace your toothbrush at least every three to four months, or as soon as the bristles fray.

There isn’t a one-size-fits-all prescription for getting rid of stress and improving overall happiness. You’ll just need to experiment and find the right solution for you, whether it’s yoga, meditation, exercise, playing an instrument, watching comedies, or something else. Whatever works is what works.

We can’t promise following this list will get you to the century mark, but it’ll certainly give you a fighting chance. Have something we missed? We’d love to hear from you! Let us know your tips for hanging around this mortal coil as long as possible. 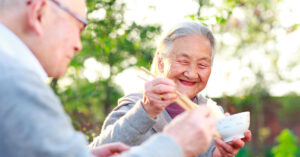